The Revolution Is on November 8th. It Will Be Televised.

The Internet is Dead

On This Day in Alabama History — Tuskaloosa Burning

You may have noticed headlines over the past few weeks of major musicians selling off all or portions of their song catalogues. Bob Dylan, Lindsay Buckingham, Neil Young, Patti Smith, and many more have taken the big checks and left their work to the corporation with the highest offer. Most of these artists aren’t too surprising. Who wouldn’t want a big payout just before retirement? However, some younger artists with catalogues as large as these generational musicians — Shakira, The Killers, and Ryan Tedder — have also cashed in recently. This new pattern should have music lovers worried.

Ted Gioia, a pillar of Music and Jazz History, took to Twitter to provide some dark predictions of the trending music industry. The image below shows his assumptions about a bidding war that has begun with a few companies in the hopes of making the last few dollars available before an industry totally collapses. Not Ideal. 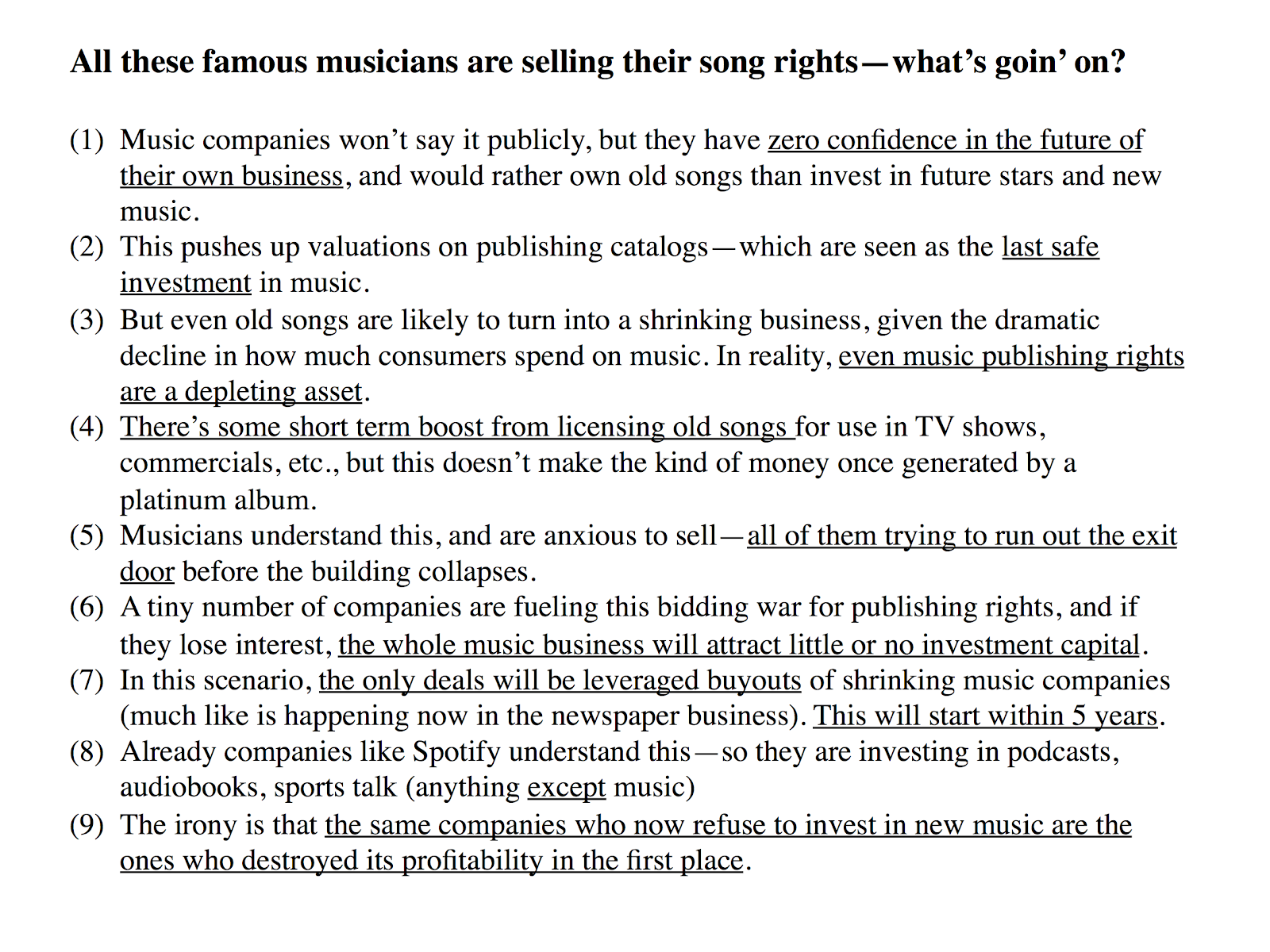 It would stand to reason that these companies hope song catalogues will resemble fine art as an investment piece. They seem to be praying that Bob Dylan’s complete works could be as valuable as a Picasso collection. Gioia’s seventh point leaves me, and I am sure many artists, wondering what the industry will look like after five years.

Anyone paying attention the past few years has probably noticed the plethora of articles about how Spotify, Youtube, and Apple don’t pay artists nearly enough for their work. Which would explain why Spotify in particular has spent millions bringing on popular podcasts. Spotify announced a recent change that would allow artists to control their “promoted” songs list for a cut of the payment for streams. Rumors are further swirling that these changes will lead to Spotify charging the musicians to remain on the platform altogether.

The pandemic has been exceedingly hard for touring musicians; that should not be a surprise. Bandcamp has been the platform with the loudest assistance and outreach to those struggling artists, offering Bandcamp Fridays where all proceeds from sales go directly to the artists. In a world where music doesn’t return much profit, that form of corporate goodwill may be the only item keeping the industry afloat. Bandcamp has recently announced that it will begin pressing vinyl records for up to 10,000 indie artists/groups.

While such an offering is great on the surface, it would seem Bandcamp sees the opportunity to become the gatekeeper for the vast majority of musicians. I’m not sure what the music industry will look like in ten years, but I am worried. It’s one thing for a struggling artist to work multiple jobs outside of playing their music waiting for their break. It could be catastrophic if that break is no longer possible.

The Internet’s Only Newsletter